In March 2018, Q made predictions about the corporate censorship push prior to the US mid-term elections.

In August 2018, Alex Jones was ‘summarily banned‘ from Facebook, Twitter, Spotify, YouTube and Apple. A clear message was conveyed in the quote often used when MSM reported on it.

Summarily ~ without the customary formalities

Facebook, Twitter, YouTube, Apple… all have proved that they are fully invested in manipulating political opinion, and will weed out whoever they see fit to appease the Current Agenda of the Establishment, no questions asked.

Of course the Current Agenda of the Establishment is anti-Trump, anti-QAnon, anti-Alternative Thought. Anti-Anyone Who Might Be Anti-Establishment. Facebook and Twitter continued their purge a month before the mid-term elections. Over 800 alternative, political pages were deleted, some with millions of followers in an attempt to stifle independent journalism. Facebook even admits they are against political debate –

Mintpress News, a well established Independent Media site were not immune and also warned that they were being silenced by the Corporate Censors as soon as Hillary Clinton lost out to Trump.

Reddit’s QAnon subs were all permanently deleted and banned, with the MSM celebrating the censorship of the apparent toxic QAnon community in an attempt to contain the ‘virus’ that is Q.

Of course Q just pointed everyone to Voat where The Great Awakening continues along with the Investigations into Pizzagate, while the bakers still work on 8chan.

All QAnon related apps were pulled from Apple stores, despite the information contained in them being freely accessible via Apple’s Safari browser. However attempts are being made to erase the current and archived QAnon posts via browsers too. QAnonposts.com is now inaccessible. (Qmap.pub is still fully functional.)

Never before has a ‘conspiracy theory’ about anonymous posts consisting mainly of Socratic-based questions been deemed so dangerous so as to delete it entirely from the public consciousness. The only danger is – people are waking up. Never before has an Idea, a Movement, an Awakening, that is anti-Establishment in nature, been attacked so frantically by the MSM. 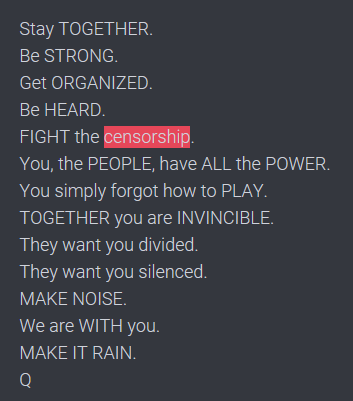