This story led me to look into a few things regarding Oxfam, Liberia, Compass Company and possible links to human trafficking:

Richard Cousins, head of the catering company Compass, who died near Sydney on New Year’s Eve, had planned to leave the majority of his wealth in trust for his two sons, but they also died in the crash along with Cousins’ fiancée Emma Bowden and her 11-year-old daughter.

A clause in Cousins’ will said that in the event he and his sons were all killed together Oxfam should become the main beneficiary of his estate.

Quite an unlikley event, that his whole family were tragically killed in this crash at the beginning of 2018, in a plane that had already been involved in a fatal crash. Quite a lucky event for Oxfam since they have been having funding issues – more on that below.

The cause of the Cousins’ crash has not yet been released. Mr Cousins was due to step down as chief boss from the company Compass, which are a UK global Catering Company, the biggest in the world. They supply schools, armies, hospitals, prisons, caterers and more – see here. And they seem to supply them everywhere.

remote camps where thousands of workers spend significant periods of time away from their friends and family.

Remote camps like in Liberia where Compass/ESS bribed millions to secure their catering deals there. They were then sued millions for this illegal behaviour. They’re also the group involved in the horsemeat scandal (if anyone from the UK remembers). Another link here about the bribery to get into Liberia.

Why Liberia? Why would an already successful, global company use such illegal risky behaviour using £1m bribes, fraud and coercion to secure contracts exclusivley for Liberia? Could it be becuase Liberia is a source and destination for human trafficking and is an easy place to smuggle children out of as explained here. Note especially some of the recommendations –

This link has further reading which evidences just how big a problem child trafficking and abuse is in Liberia and how it is hugely under reported. The UN Peacekeepers are cited as culprits.

Why the link to Oxfam? Oxfam has shown us that when remote camps are set up in places like Haiti, child exploitation occurs. The story below barely made the news in 2011 when it was ‘discovered’ and investiagted by Oxfam. Top Oxfam staff were paying underage Haiti survivors for sex and it was not considered headlines news. However a month after Mr Cousin’s death in 2018, the media for some reason went crazy running the story as a huge scandal, overlooking the fact it happened 7 years ago – only flutters of the timelines were mentioned.The article below is from 2018, 7 years after the events occured. 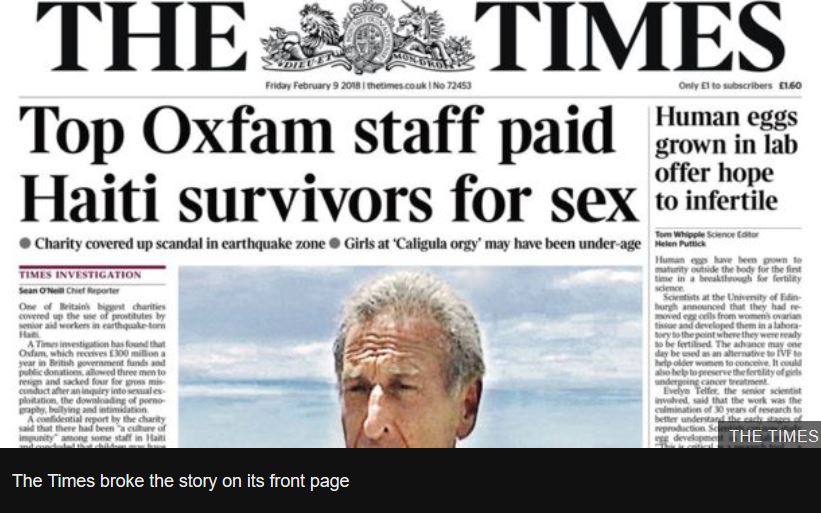 This was headline primetime news in the UK for weeks at the beginning of this year and I found it strange, like it was a deliberate rehashed story for some reason.

Here is good overview of the media frenzy by the BBC –

Oxfam, one of the UK’s biggest charities, has dominated the headlines in recent weeks following allegations its staff hired prostitutes while working overseas.

Since then, the story has continued to develop, with the Charity Commission launching a statutory inquiry – the most serious action it can take.

Oxfam – which has nearly 10,000 staff working in more than 90 countries – denies any cover-up.

In fact there did appear to be no cover up by Oxfam.

As they say, they investigated at the time and they released their findings to the press (see again) –

The charity says it uncovered the accusations in 2011 and immediately launched an internal investigation.

The cover up so to speak appears to be that the media simply did NOT adequately cover this at the time. THEY didn’t make it into a scandal so it didn’t become one. And then years later suddenly it was.

The UK government swiftly decided to withdraw funding from Oxfam which would be around £31.7million based on last years funding –

At the time, celebs linked to Oxfam withdrew their association, which would also cut Oxfam a loss. People began to boycott their charity shops and cancelled their charity payment subscriptions, stopped donating books and clothes etc. Add that to the £31.7m and we are getting closer to what would seem to be around the £41m loss that they’ve conveniently now had donated. By Compass’ deceased CEO, Mr Cousins.

At this point its important to point out there is nothing to link Mr Cousins to any wrong doing – he took over Compass after the scandals of bribery in Liberia. It makes one wonder though, what did he find out while working there? How deep did their corruption go? Why did he write Oxfam into his will? He did have other family but his millions were to go to only his sons or if both sons died at the same time as him, ALL to Oxfam. Isn’t this a bit strange to give ALL his fortune to Oxfam? Hasn’t it worked out quite well for Oxfam that they have effectivley now suffered no financial loss over the ‘scandal’ from 2011 that was only made a scandal in 2018, after Mr Cousins’ death?

Is Oxfam taking some sort of damage limatation to satisfy some of the pizzagaters, who are investigating these crimes in Haiti etc? It’s almost like they and the media are saying ‘oh look – yes they were bad, now look away‘, so as to keep people from finding out the real truth.

Is a food service company a good way to get ‘workers’ on the ground in countries chosen for these purposes, knowing full well what we know about the workers of Oxfam in Haiti, should we be surprised if this company is another front for networking trafficking as they have the money and the power to ensure they have their workers based in easily exploited countries when they want to be? Like what Oxfam did with Haiti.

Compass’ strange obsession with securing contracts in Liberia may turn out to not be child trafficking related but we can’t rule out that something corrupt is going on in Oxfam with all of these facts, and unfolding developments…

Recently, a whistleblower has gone on the record claiming that the United Nations, Oxfam, and The Clinton Foundation all traffic children and sell them for sex

According to former UN Chief Dr Andrew Macleod, major international aid agencies are responsible for the sex trafficking of children in many of the countries they operate in.

Speaking to the Daily Mail, the former UN Chief provides graphic detail to prove that charities around the world, including the Clinton Foundation, are staffed by a disproportionately high number of pedophiles and are guilty of sex trafficking.

The idea that, through our donations or taxes, we have all been enabling child abuse is unthinkable.

In aid circles, the problem is played down, wrapped in jargon: instead of child rape, people talk about ‘sexual exploitation and abuse’. The mere existence of an acronym – SEA – makes it seem as if the situation is under control.

Even after recent headlines, many in the industry still refuse to talk about it.

Dr Andrew Macleod’s full testimony supports the much-denied-by-the-media Pizzagte theory. Oxfam’s  deputy chief executive has now resigned and Oxfam are now having to explain why they should be allowed to keep the millions of public money they receive.

Despite the media desperately trying to claim that the theory that child trafficking rings exist in every institutions from charity organisations to political power houses, the public is waking up to the truth.